Who let the dogs out?

Who let the dogs out?
Kriss Kyle did.

The world knows all about Kriss Kyle, thanks to his really quite astonishing skills on a BMX (and indeed many other bikes) whether that be launching out of a helicopter in Dubai on his Freedom BMX from BSD or heading over to the skatepark in Livingston, just down the road from Endura HQ – who makes Kriss’s cycling clothing, apparel and protection – to wow some local youths.

The world is also getting to know his dogs too though, their own levels of fame catapulting them into bona (sorry) fide social media influencer status. So much so in fact, that they’ve attracted their own dog clothing sponsor, Non-Stop Dogwear who even asked the dogs to sign a contract with their pawprints. 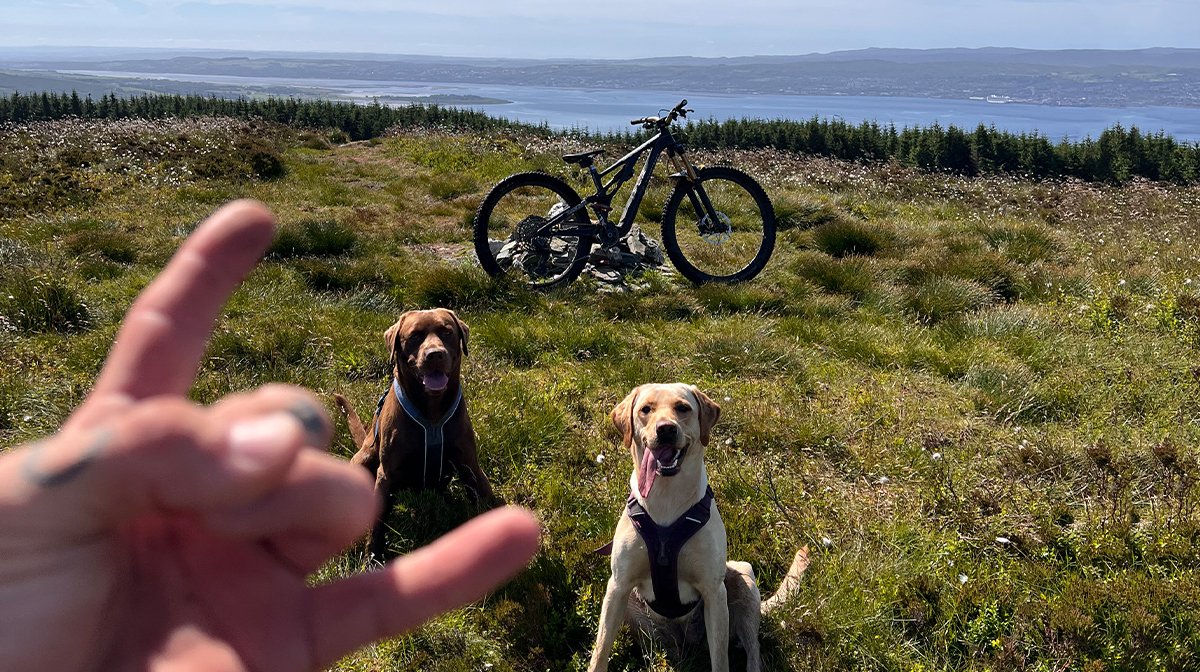 Kriss reminds us, “I did suggest to someone at Endura years ago that they should make dog clothes, but I think they thought I was joking”. An Endura product spokesperson was contacted to verify or deny this allegation but declined to comment – probably still kicking themselves at missing this golden…. lab (argh, sorry) opportunity, no doubt. But you never know, it could be something for a future co-lab (look, I’m really sorry about this, it’s like a form of Tourette’s or something).

Train to train
The dogs, Alice and Albert, are a yellow Labrador and a chocolate Labrador respectively. They’ve become internet sensations because they appear right alongside Kriss in his training films and edits while he’s out on his BMX or MTB.

We know the question you’re asking yourself, right now in your head, as we thought the exact same thing too, “Aren’t you worried the dogs will go under the wheels or get hurt?”

Kriss tells us it was a long process he carefully went through step-by-step, but first of all, fully admits he initially did it all for his own benefit, “My mates were all at work doing real jobs while I was out riding and training on my own, so I just wanted some company really”. 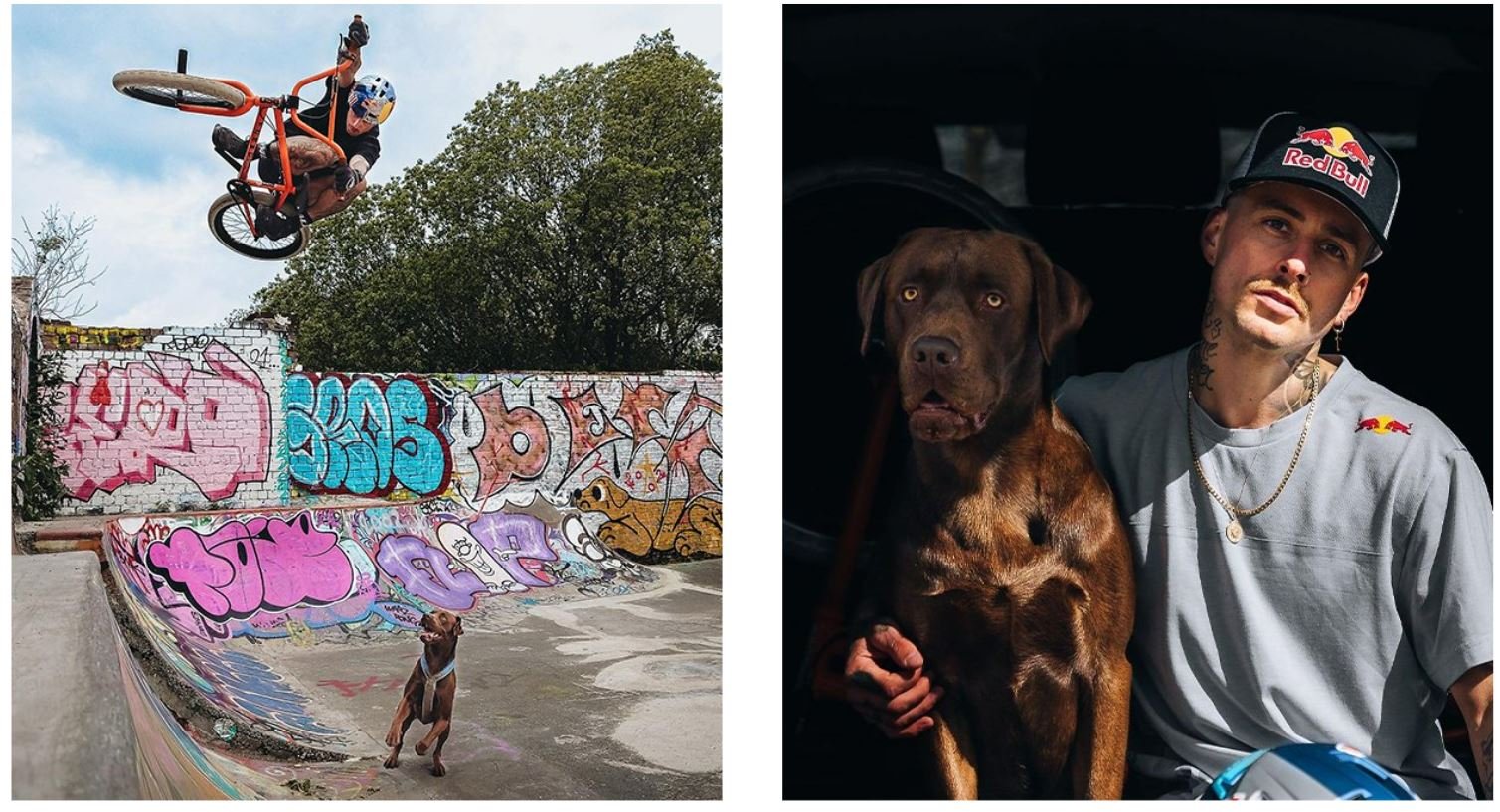 “I started off just slowly walking around the garden with my dogs and the bike, so they could get used to it and the noises it made”, he tells us, “I have my garden set up with a few jumps and ramps, so gradually I just started rolling up and down them with dogs following me around”

From here he says, “It was really just a process of going out on longer and longer rides, there’s some easy flat trails near my house, so I started off with them and worked up from there”

Kriss tells us that the dogs are now so used to the bike(s) and the way it moves, that they instinctively know where to be at all times, and while to us it sometimes looks like a bit of a close call, they never get in the way or get hit. Kriss even gestures to them by nodding or pointing towards the way he’s going to go, or the line he’s about to take, and they just know.

Kriss says, “It’s got to the stage now that even when I put my helmet on at home, the dogs just start just going mad with excitement, they love it”. 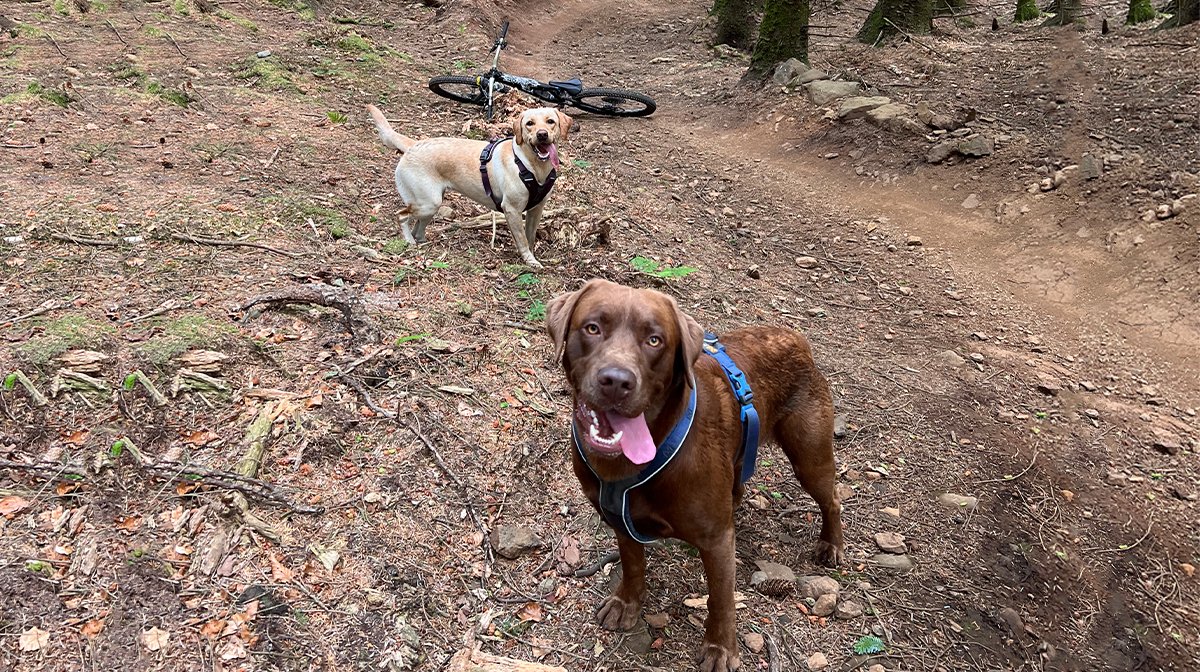 Jump and you’ll miss it
“Have you ever had any near misses?” we ask, hoping for a straight no. “There was one time I was out, even before my dogs started coming out with me, and I hit a jump; Just as I took off, I saw a lady walking her dog suddenly come into view in the spot I’d be landing and I thought ‘Oh shit!’, but luckily, I was able to move the bike out of the way in time”. Kriss goes onto to say, “She was all apologetic afterwards, saying she was really sorry to get in the way, but I told her it wasn’t her fault at all, she probably wasn’t expecting anyone to launch themselves off the cliff edge on a bike”.

It’s a fair point, it’s not every day you see a bike five metres above you while out walking the dog for its morning poop.

For anyone that hasn’t yet seen Kriss dogs in action, then here is just one of the many videos of Kriss, Alice and Albert Kyle sending it on two-wheels and eight-paws – Best Friends – Kriss Kyle shreds with the dogs.

New Kit for a New season – Spring Classics From Endura

Choose #EnduraCustom For Your 2021 Club Kit

Ride into Endura Custom in 2022

The MT500 Jacket – The Undisputed King of Mountain Jackets